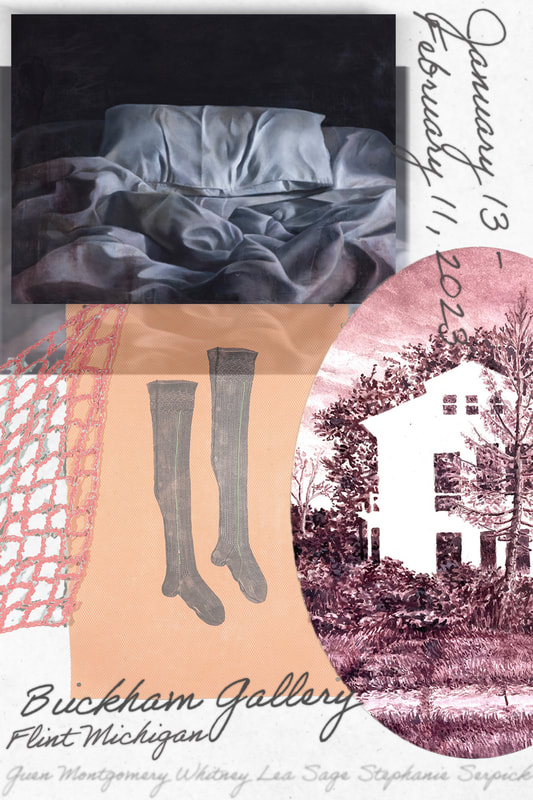 Guen Montgomery’s installation, Crawl Space, explores the trait of ‘trouble discarding rarely used possessions.’ Crawl Space is a neglected place where things are left and forgotten with the assumption that they will always be there, unchanging. Prints are made from fur and clothing inked and printed on an etching press. Montgomery makes prints like this because it centers on touch. Both the actual, literal, pressured touch of fur or fabric matrix to paper, and the sense of longing to touch that comes from the printed illusion of fur or fabric. Touch is a key anchor to our bodies and to the world, and is a reminder that we can’t escape the material.

Whitney Lea Sage’s exhibition, Portraits of Home, presents the neighborhoods of Detroit and Highland Park, Michigan with nostalgia through the language of meticulously rendered monochromatic ink drawings on watercolor paper and aquaboard panels. Stylistically modeled after tintype photography, Portraits of Home and Sage’s Homesickness Series, feature frame-endangered or absent homes in these cities as they appear today, as white voided façades or as empty lots.
​
Stephanie Serpick’s oil paintings in Interior Visions: Domestic Sphere explores themes of isolation, grief, especially as it was magnified during the pandemic. Our forced isolation and the challenges it brought to our physical and mental health provides a shared experience from which to consider grief and eventual healing. Serpick was awarded a Pollock-Krasner Foundation Grant in 2020 and in 2018 she received the Ruth and Harold Chenven Foundation Grant. She earned a BFA from Carnegie Mellon University and MFA from the University of Chicago.

Solo Exhibitions will be on view at Buckham Gallery from January 13 through February 11, 2023. Flint’s ARTWALK to be held Friday, January 13 and February 11, from 6 to 9 PM.