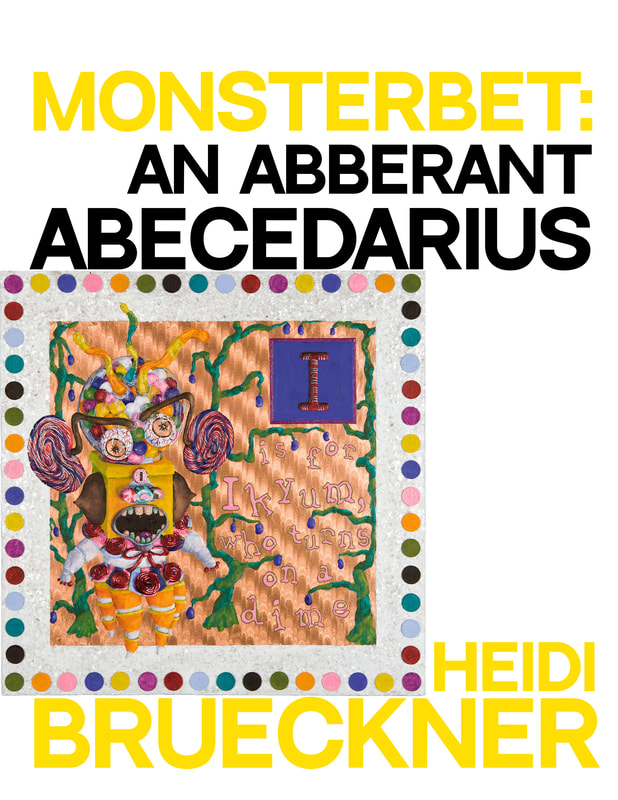 Artist Statement
My work focuses mostly on cultural allegories and norms conveyed through a collage-like juxtaposition of figurative imagery, symbolism, and elaborate patterning. Often the figures personify the precarious, dark, grotesque, and sleazy side of human nature, subjects by which I am continually fascinated.

These topics seem to require, and in fact dictate, frontal, discomforting, and intrusive compositions. I revel in playing with bright color and pattern, tilted and flattened space, and distorted form in order to achieve this needed psychological expression and visual activity, but also to create an element of humor and fun.

A recent body of work, entitled Monsterbet, is a series of 26 oil and mixed media paintings, all 16” x 16”. The works are based on the traditional format of children’s alphabet books, but with a layer of social commentary. The subject may be a bit more benign and childlike, but I still strive to keep a gritty edge in the work. Each letter of the alphabet stands for an invented monster that has a particular quirk. Every two paintings form a rhyming couplet, which has given me the opportunity to play with language. They are meant to be silly and fanciful while simultaneously touching on some of my favored themes of human vice, morality, and fear.
The series has also been published as “Monsterbet” the book, available for purchase at Etsy, Amazon, and at the website heidibrueckner.com.

Artist Bio
Heidi Brueckner is a Professor of Art at West Valley College in Saratoga, CA where she has taught painting, drawing, and design for over 20 years.
A native Californian, Brueckner studied at the University of Heidelberg and The Goethe Institute in Germany in the late 1980s. During this pivotal year, she visited the major museums of Europe and found herself heavily influenced artistically by 20th century German art.
Brueckner received a BA in Fine Art and a BA in Art History from University of California, Santa Cruz in 1991. She received an MFA in Painting from University of Kansas in 1997.
Professor Brueckner’s work has been shown at museums, galleries, colleges, and in publications nationally and internationally. She has received many awards and scholarships for her work.
In 2018, she published the book “Monsterbet”, based on a series of 26 satirical oil, acrylic, and mixed media paintings spoofing the format of a children’s alphabet book. The book is available for purchase at Etsy, Amazon, and at her website heidibrueckner.com.
Brueckner has won 12 first place awards among others in 20-21, which include the Italian International Prisma Art Prize and the Faber Birren Color Award, and has participated in over 100 juried shows. Upcoming solo exhibitions in 2022-24 include O’Hanlon Center for the Arts, Mill Valley, CA (3 person); Women United Art Movement, Online; Crossing Arts Alliance in Brainerd, MN; Kirkland Art Center in Clinton, NY; Delaplaine Arts Center in Frederick, MD; Grants Pass Museum of Art in Grants Pass, OR; and Johnathan Ferrara Gallery in New Orleans, LA.
She currently lives and works in Oakland, California.